Book Title: Seasons of TomorrowAuthor: Cindy WoodsmallPublisher: WaterBrook PressPub Date: April 15, 2014Declaimer: “I received this book for free from Blogging for Books for this review.”Series: Amish Vines and Orchards #4Genres: Amish, Amish Fiction, Fiction, Christian, Christian Fiction,Synopsis: As love restores Rhoda, a sudden tragedy is the test of faith she never saw coming… More settled in her heart than ever before, Rhoda Byler feels a newfound confidence living in the Old Order Amish settlement she helped establish in Orchard Bend, Maine. Though it has been almost a year since one brother left, Rhoda is happy to be working alongside the other brother as they tend and nurture the settlement’s orchard. Time has helped to heal Rhoda’s wounds, and she finds that even her unusual gift of profound intuition is less of a burden as she continues to seek God’s wisdom and purpose for her life. But when an Englischer friend’s grandchild is taken deeper into hiding from her grandmother, can Rhoda’s gift make a difference or will it simply be a catalyst to another season of doubt and misunderstanding? As she resolves to stay on course, suddenly a shocking tragedy challenges the young settlement like never before, threatening to uproot Rhoda’s peace and the future of everything she holds dear.
Reviews: Goodreads, Shelfari, Librarything, Barnes and Noble,
My Thoughts:Rhoda has started feeling settle in Maine. She starts to follow her god talent and tries to help an englisher with finding her grandchild. Soon a family tragedy happens and things start unravel a bit in Maine. Will the new settlement stay and be able to establish. Samuel dat come to make a demand about his daughter Leah. What will happen to all though who are making it a go in Orchard Bend, Maine. You may like how it ends up and see all the battles the new settlement need to overcome?

Book Title: For Every SeasonAuthor: Cindy WoodsmallPublisher: WaterBrook PressPub Date: August 20, 2013Genres: Christian Fiction, Fiction, Series, Romance, Amish, Amish FictionBook Resource: Received it from Waterbook for a free honesty ReviewSeries: Amish Vines and Orchards #3 Synopsis: Working hard to develop a new Amish community outside of Unity, Maine, Rhoda Byler is fully committed to rehabilitating an orchard with business partner Samuel King. But an impulsive decision has created an unexpected strain in her relationship with her beau, Samuel’s brother, Jacob, threatening plans for the orchard. Amidst mounting tension in matters of the heart and business, Rhoda finds that this fledging settlement feels like the home she has always longed for, and she begins to embrace the God-given, heightened intuition that has always felt like a burden to her. She longs for Jacob to fully be free of his past, so they can work towards the future together.

But as Rhoda uses her gift to unpack an old secret with her Englisch neighbors, it is not her beau but an unlikely ally that cheers her on. With the orchard on shaky ground and Jacob’s plans in question, Rhoda is determined to see things through to harvest. But can she trust her insight to direct her path in matters of the heart?Reviews: Goodreads/ Shelfari/ LibraryThing/ Barnes & Noble/My Thoughts:This the best series I have read. Though I have read other series. I love this book because it is just different and I love that it is catching and keeps me to be surprised. I like getting to know each person in the book and in detail. It also keeps me wanting more and making me wait for the next book for more.The author is great in this. You learn new secret and new storylines that are dealt with. We find out if Jacob can free himself of his past along with Ronda. Ronda learn that her gift from god and what do with it or at least some of it. Will Ronda and Jacob be together in future. You will need to read it to find out for yourselves.Do they learn what kind of relationships they each want. Samuel, Jacob and Ronda all need to figure it all out. I wonder where each one will go and who will choose who or what path they decide to take. If you have not read this series. I would recommend it that you do. The series starts with the book “A Season for Tending”.

Book Title: A Season for Tending

Synopsis:
Old Order Amish Rhoda Byler’s unusual gift and her remarkable abilities to grow herbs and berries have caused many to think her odd. As rumors mount that Rhoda’s “gift” is a detriment to the community, she chooses isolation, spending her time in her fruit garden and on her thriving canning business.

Miles away in Harvest Mills, Samuel King struggles to keep his family’s apple orchard profitable. As the eldest son, Samuel farms with his brothers, the irrepressible Jacob and brash Eli, while his longtime girlfriend Catherine remains hopeful that Samuel will marry her when he feels financially stable.

Meanwhile, Samuel’s younger sister Leah is testing all the boundaries during her rumschpringe, and finds herself far from home in Rhoda’s garden after a night of partying gone badly. But Leah’s poor choices serve as a bridge between Rhoda and the King family when a tragic mistake in the orchard leaves Samuel searching for solutions.
Rhoda’s expertise in canning could be the answer, but she struggles with guilt over the tragic death of her sister and doesn’t trust herself outside her garden walls. As the lines between business, love, and family begin to blur, can Rhoda finally open up to a new life? And what effect will this odd, amazing woman have on the entire King family?
My Thoughts:
Ronda is having trouble letting go of her guilt. Though it all she meets Leah King. Ronda starts to see that her family struggle  But her dreams with her garden she will not let go. Sumuel starts having trouble with the apple orchard. Though Samuel is having some trouble he starts something with Ronda as partner with King’s Orchard.

Samuel struggles with this family orchard. Things show that Ronda care about Samuel. For she goes after Samuel when something happens. 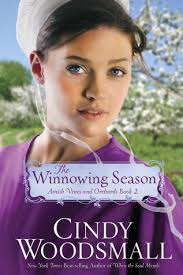 Synopsis:
On the eve of their departure to begin a new Old Order Amish community outside of Unity, Maine, Rhoda Byler is shocked to discover that choices made by her business partner and friend, Samuel King, have placed her and her unusual gifts directly into the path of her district’s bishop and preachers. She is furious with Samuel and is fearful that the Kings will be influenced by the way her leaders see her, and not what they know to be true—that Rhoda’s intuition is a gift from God.

Jacob King won’t be swayed by community speculation. He loves Rhoda, believes in her, and wants to build a future with her in Maine. But when the ghosts of his past come calling and require him to fulfill a great debt, can he shake their hold before it destroys what he has with Rhoda? Samuel has a secret of his own—one he’ll go to great lengths to keep hidden, even if it means alienating those closest to him. Throwing himself into rehabilitating the once-abandoned orchard, Samuel turns to a surprising new ally.

Book 2 of the Amish Vines and Orchards series asks: can the three faithfully follow God’s leading and build a new home and orchard in Maine? Or will this new beginning lead to more ruin and heartbreak?
My Thoughts:
I loved this book even more. It tell you more about Ronda Bayler. I love the fact that it tell us about her and she learn a lesson as well about a few things and what gods wants. Though does she know that she may be in love with some else but thinks it Jacob. We will have to see about that in the next book.

This book also goes in to depth about  Jacob past as well. I do not know want to give way anything. I strongly you read this book if you have read “A Season for Tending”. If you have not you can read this on first and then the that one. But that up to you.

In this book, you learn more about Ronda and her family a bit and also about Jacob and Samuel. There some fun things that happen and what they were learning about how to start a settlement in Maine. Do they learn about Friendship as well.